〝The beauty of a city does not come from nowhere or simply lies on the surface; it is deeply rooted in the soil, and then blossoms vigorously.〞

The attractiveness of Taichung originates in its abundant ecosystems, the ancient glamour of history, and incredible arts and literature.
While endeavoring to achieve modernization as well as remember the past, Taichung strives to meet the international standards to be globally well-known as well. 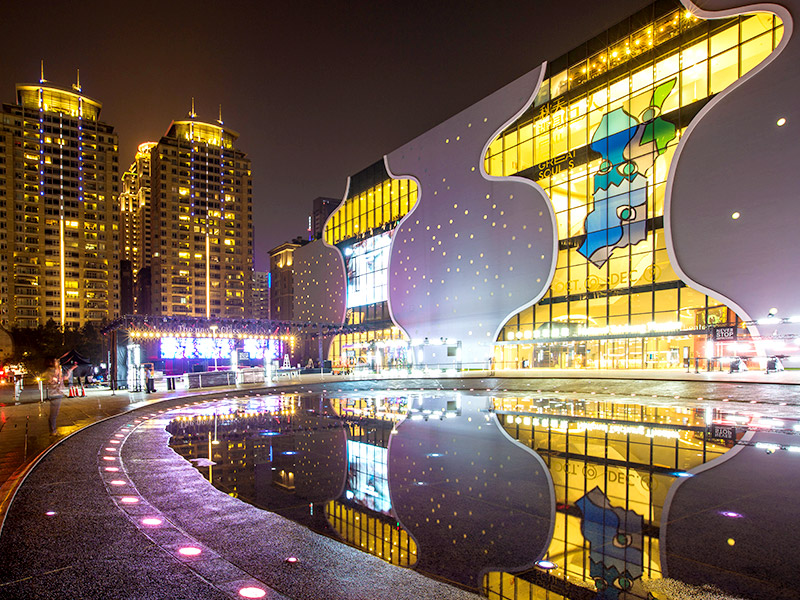 National Taichung Theater, nicknamed “the Most Difficult House to Accomplish” by the industry, was designed by the internationally acclaimed Japanese architect, Toyo Ito.

Drawn from the concept of the Sound Cave, National Taichung Theater makes the best of its streamlined, rigid silhouette by means of modern techniques and materials, and then turns itself into an active venue.

The images of streams and hanging gardens on the exterior of the opera house break the usual binary separation between stage and audience, as well as outdoors and indoors. It aims to initiate more conversations among people, art and architecture, while bringing people back to the basic aspect of life: feeling real. 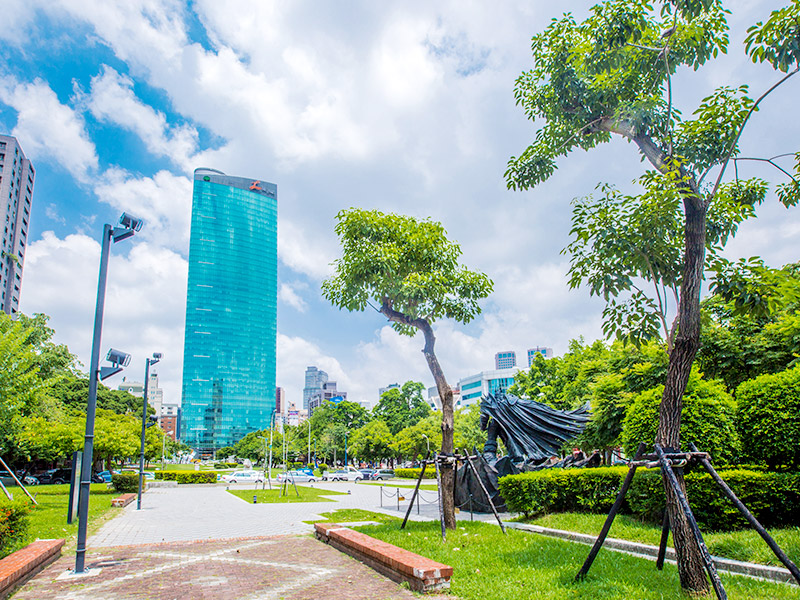 The band-shaped city space that is Green Park Road connects the National Museum of Natural Science, Citizens Square, CMP Park Lane, an arts space, the National Taiwan Museum of Fine Arts and a food-selling street. The atmosphere changes with each different activity; sometimes bustling, sometimes tranquil, the space is sometimes full, and sometimes empty, giving the area a natural harmony and flow like that of grass script calligraphy. As the design was based on the concept of finding the way to write ‘grass script' calligraphy, it is also known as the Calligraphy Greenway. 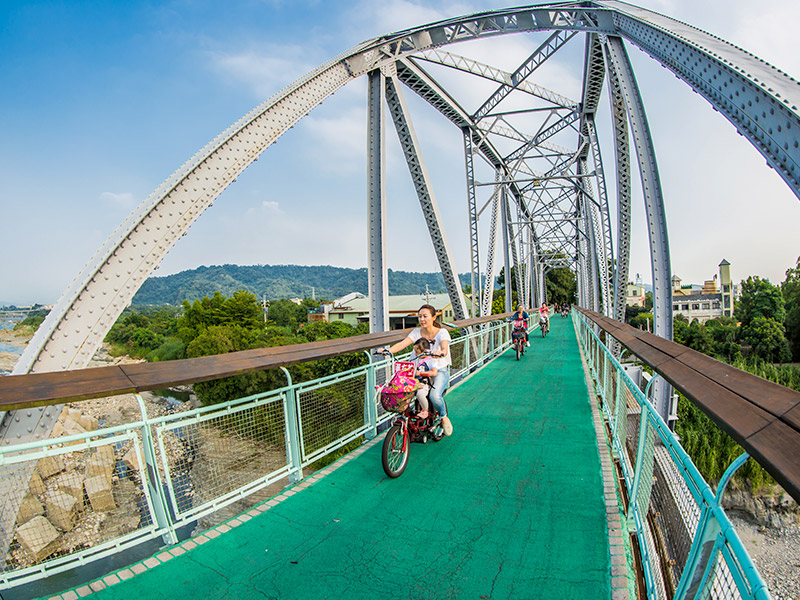 The 4.5 kilometer long Hou-Feng bike path was built along the old Mountain Railway Line. The beautiful scenery constantly varies. It crosses an iron bridge over the Dajia River and goes through the old railway tunnel, adding to its charm. 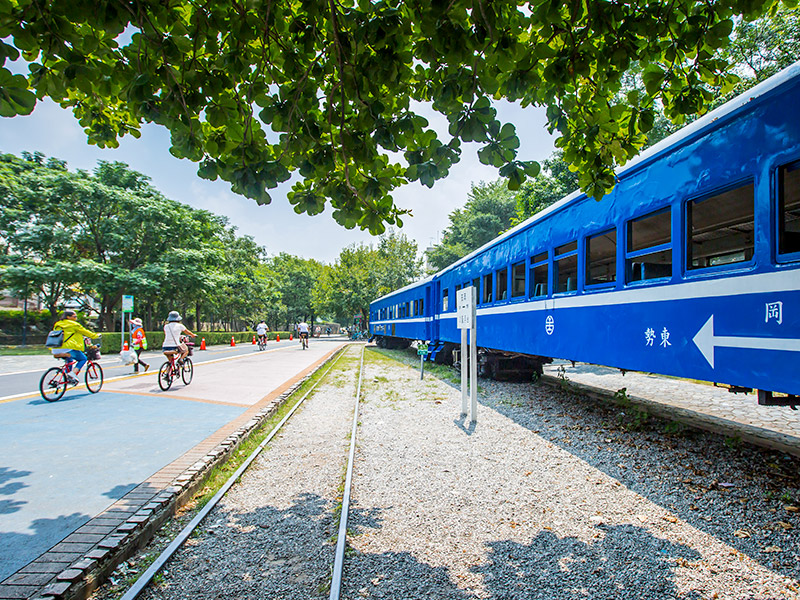 Around 12 kilometers long, Dongfeng Bicycle Green Way Green Corridor was the first bikeway to be made from a disused railway line in Taiwan. It has lovely scenery and exudes Hakka charm. Tree planting along the bikeway has made it a green corridor that perfectly complements the Dajia River that runs beside it. This bikeway connects to Hou-Feng bike path and is a popular leisure spot in the Taichung area. 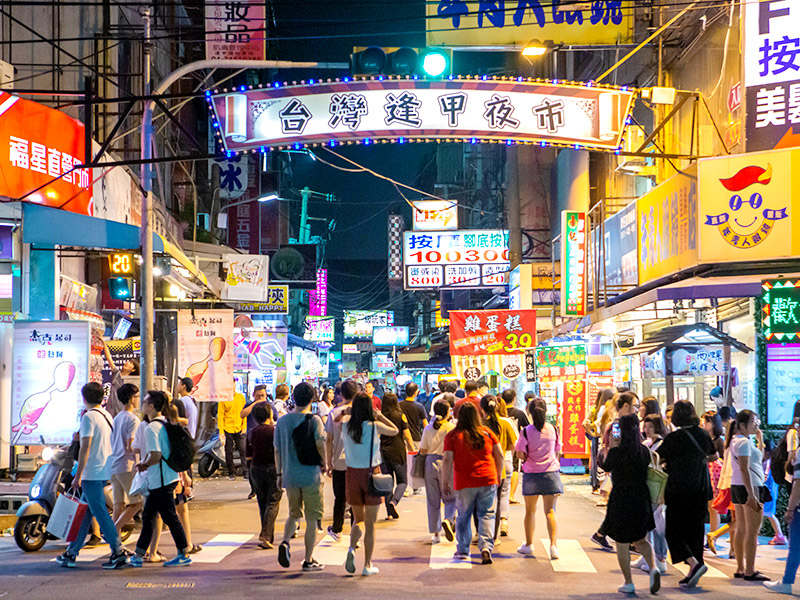 Feng Chia Night Market is within a 1 kilometer radius of Feng Chia University. It includes Wen-hua Night Market, Feng jia Road, Xitun Road, Fuxing Road and Beacon Sun Plaza. According to marketing surveys, it is one of the most popular and visited night markets among young people. At weekends, as many as 30,000 people will pass through it! It is perhaps the most famous night market in all of Taiwan. Feng Chia has all kinds of creative take-away snack foods to sample; it is also full of new clothes that are oriented toward young students. They are fair-priced and fashionable. A sensory feast for both the eyes and palate! (Xitun District)

Satisfaction for your body, heart and soul 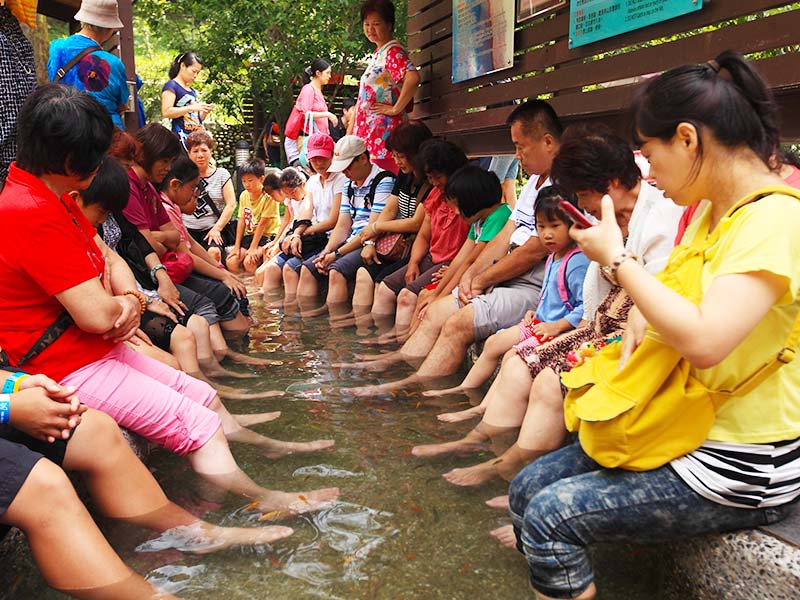 Guguan is situated amidst rugged terrain, with high mountain peaks reaching to the sky. The hot springs flow from between the rocks at the foot of the mountains all year round. Due to the high sulfur content the air is filled with the pungent smell of sulfur when close to the springs. It is said that after bathing here the Meiji emperor of Japan had a son, leading to the springs being nicknamed “Son Springs.” 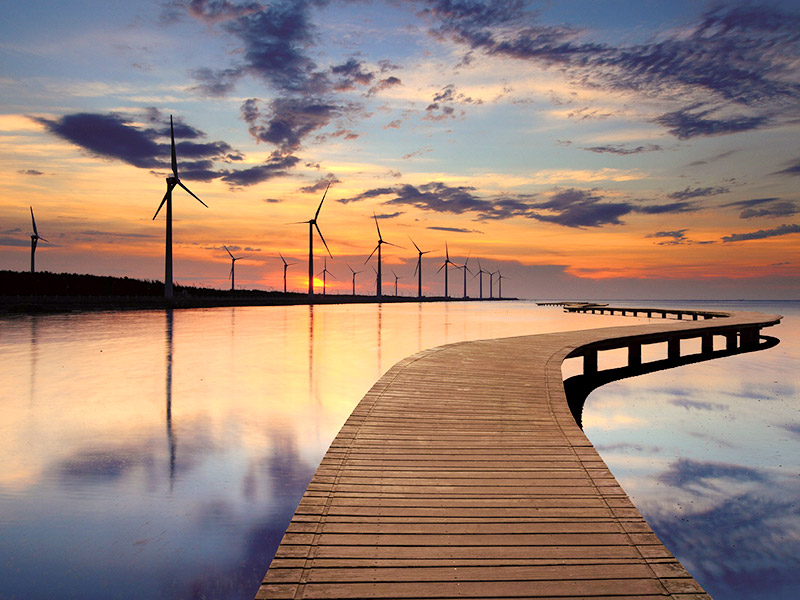 The Gaomei Wetlands are located on the south side of the Dajia River Estuary in Qingshui. Over 120 bird species have been recorded here, it is an important ecological conservation area. It is not large, but because it has both mud flats and sand beaches and is also connected to the estuary's swamp area, it contains a rich variety of flora and fauna. It also offers beautiful sunsets over a unique manmade landscape, Gaomei Lighthouse and wind turbines. A cycle track runs through the area on which riders may coast with the wind in their hair, the Gaomei Wetlands are one of the highlights of the shore. 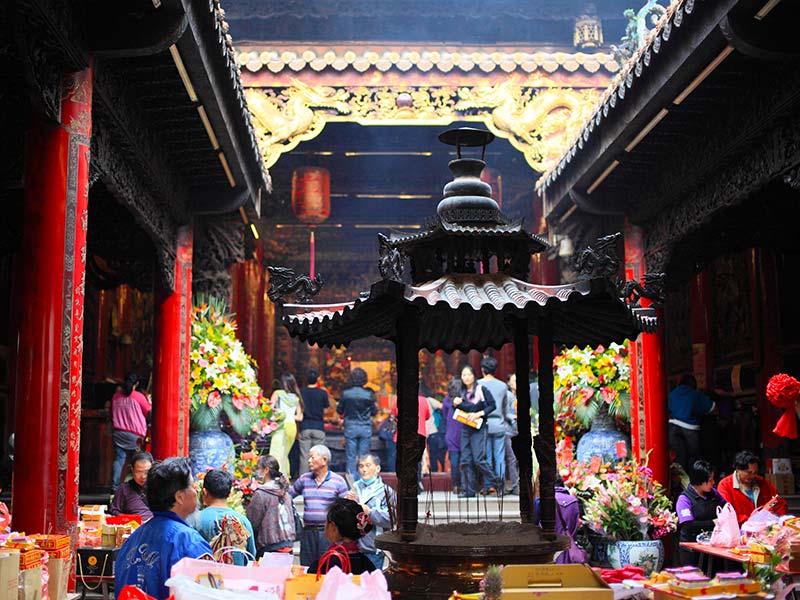 Dajia Jenn Lann Temple is one of the most famous Mazu Temples in Taiwan. It has over 200 years of history. It is filled with pilgrims all year long. The inspection tour held in March every year has become a world-famous religious ceremony attracting domestic and international tourists. It is a scenic spot that best represents Dajia. The violet jade Mazu of Jenn Lann Temple and the Golden Mazu in the basement of Mazu cultural museum are the treasures of the temple. Now, Mazu is considered one of the three treasures of Taichung. It is a scenic spot you must visit when in Taichung.

The first century-old park in Taiwan 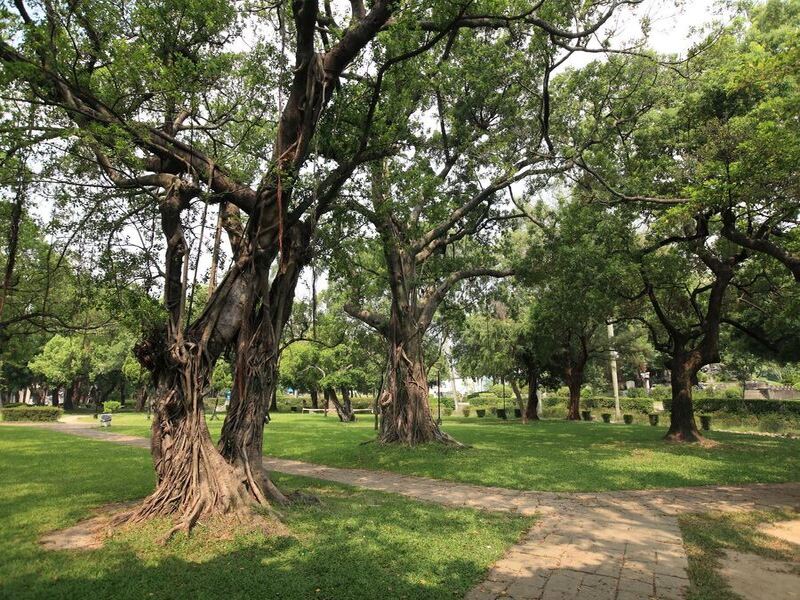 Since it was opened in 1903, this Park has been an important Taichung landmark. The Park has a man-made lake, pavilions, arched bridges and other landscape features, as well as an outdoor stage, children's playground, tennis courts and other recreational facilities, making it suitable for the whole family. As the Park is located in central Taichung and is easy to get to, it is a popular family destination during weekends and holidays. 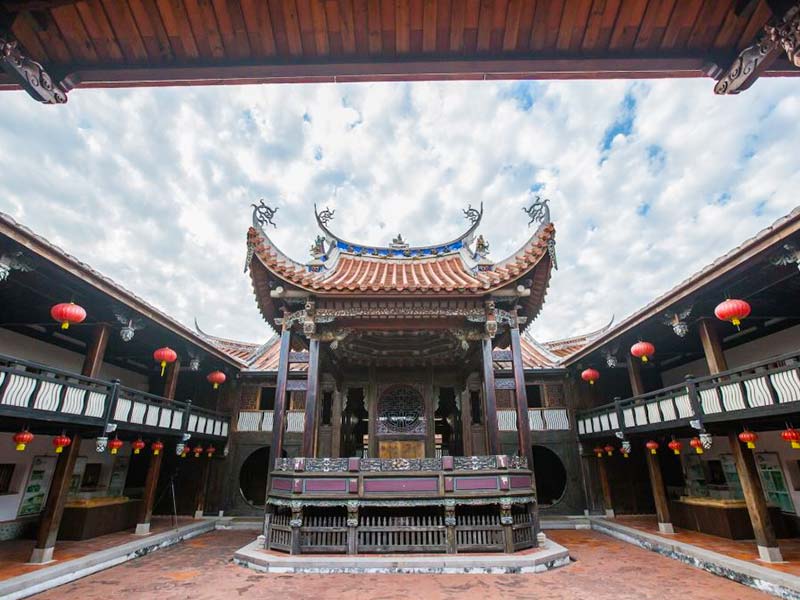 The Wufeng Lin Family House is the collective name given to the garden and residences in Wufeng, which consists primarily of the upper and lower house and the Lai Garden. At present the lower house is still being renovated. Lai Garden, in which Ming-Tai Vocational High School is located, was built for his mother by juren imperial scholar Lin Wen-hsien and became famous throughout Taiwan as the Lin Family Garden. In the years since it was first built in the Qing dynasty, the style of the buildings has changed considerably. In the later period, new buildings and gardens that are a mix of Chinese, Western and Japanese styles appeared.

The Town of Pears 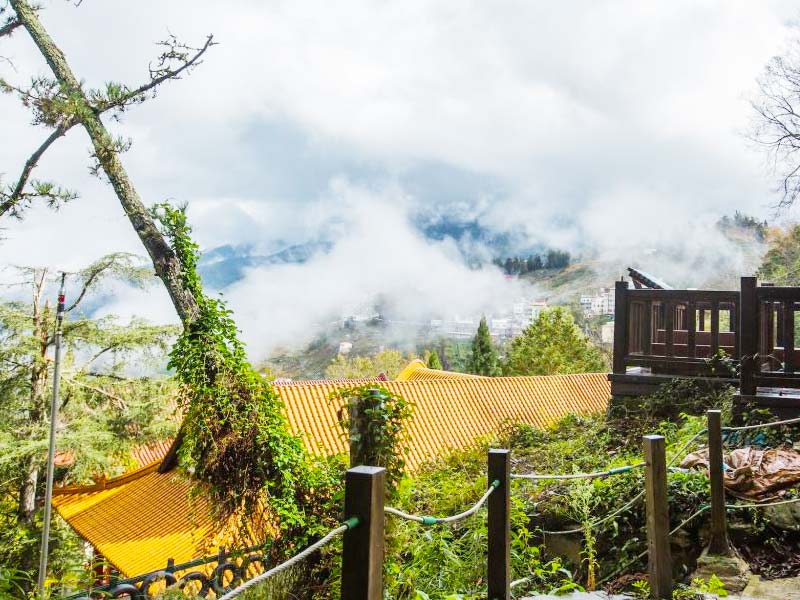 Lishan Scenic Area lies on the western section of the Central Cross-Island Highway, adjacent to Shei-Pa National Park and Taroko National Park, and includes three main recreational systems: Guguan, Lishan and Siyuan Yakou. Siyuan Yakou is located on Provincial Highway A. Take the highway, passing through Huanshan village, to visit Wuling Farm. Here you can experience Atayal culture as well as see the rare indigenous fish, the Formosa landlocked salmon, and the distinctive geology of the region and other.

Back to the top of page